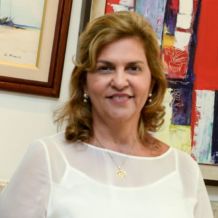 Born in Jequié, a municipality in southeastern Bahia, Leila Brito holds a post-graduate degree in Hospital Administration from the Federal University of Bahia (UFBA). In 1992, she was hired by Fundação José Silveira (FJS) and, with professional qualification and commitment, has developed a trajectory of success in the Institution. Due to her performance and her outstanding performance, in a short time she was assigned to take over the Coordination of Social Assistance. Among other achievements, in the biennium 1998/1999, was member of the State Council of Social Assistance. In 2009, in recognition of her competence and commitment to the ethical values ​​and principles governing the Foundation, the then chairman of the Board of Trustees of the FJS, Professor Maria Theresa de Medeiros Pacheco, appointed Leila to take over the Foundation’s oversight José Silveira.

As superintendent, Leila has promoted important accomplishments, always in line with the guidelines issued by the institution’s Board of Trustees. Among the advances in its management, there was the implementation of Strategic Planning; the partnership for technical-scientific exchange with the Association for Assistance to Children with Disabilities (AACD); the resumption of scientific research and the revitalization of the FJS Research Center, with important initiatives such as the international research Report Brazil, which has a modern biorepository that collects and stores information about the cure among patients and the occurrence of active tuberculosis between contacts .

Leila is also responsible, with the approval of the Board of Trustees of the FJS, for the expansion of the IBIT Tuberculosis Control Program, which resulted in a technical cooperation agreement with the São Paulo City Hall, and for the restructuring of the Bahiano Institute for Rehabilitation (IBR), which won a multi-sport set with swimming pools and indoor court. His career is also marked by the expansion of the FJS’s work, such as the inauguration of the Santa Casa Hospital São Judas Tadeu in Jequié and the revitalization of the Pestalozzi Rehabilitation Center in Salvador.

With the use of mobile units equipped with consultants to provide, free of charge, medical care and complementary health services and promotion of citizenship in multitudes held in Bahia, boosted the Health and Citizenship Project. In the management of Leila Brito, the José Silveira Foundation consolidates its performance as one of the philanthropic institutions of national reference for good practices, allied to quality in care, focusing on patient safety, advances in social and health indicators.