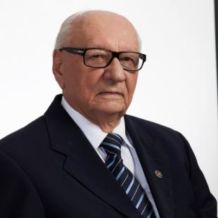 The chairman of the Board of Trustees of the José Silveira Foundation is the physician Geraldo Leite, graduated from the Bahia Medical School in 1950. During the university student period, he founded a student body of great relevance, the Oswaldo Cruz scientific scholarship; participated in courses of improvement; and won the Prize Professor Fernando Luz, for the best work of student authorship, among other achievements.

Already a physician, he was elected President of the Bahian Association of Medicine (ABM), Regional Feira de Santana, and was part of the coordination of several scientific events in the Area. In the field of education, he was a full professor at the Bahian School of Medicine, a full member of the Bahia Medical Academy, rector of the Feira de Santana State University, among other activities of his active career. In 1997, he was elected to the Board of Trustees of the José Silveira Foundation. For his brilliant performance, in 2010 he assumed the presidency of the institution.