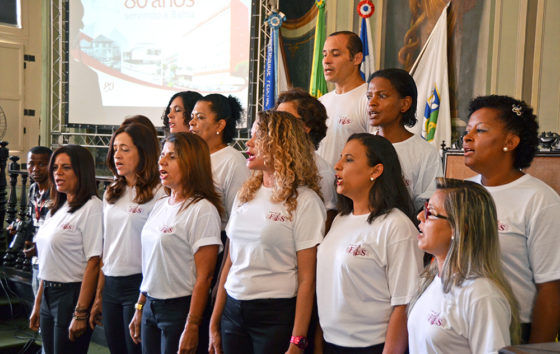 The FJS Choir is an initiative of the José Silveira Foundation that reflects the institution’s interest in promoting actions focused on the quality of life of its employees. They are more than 16 years of performance, fulfilling satisfactorily the objectives of strengthening integration, promote well-being in contact with music and spread the musical culture. The experience of participating in the Choir reinforces aspects such as self-esteem, trust and teamwork.

The FJS Coral enchants in its presentations by the quality of the musical performance and the harmony in the set of voices. The group has performed in internal and external celebrations and events, conquering the public for its performance and the enthusiasm of its members, fruits of a work developed with seriousness, professionalism and commitment to do the best.

Under the direction of conductor Carlos Veiga Filho, the team has already been present at various coral gatherings, such as Festcoros Bahia and the Federal Justice Corals Encounter, and has performed in several public places in Salvador, such as malls and tourist attractions . Wherever he goes, the FJS Choir spreads the audience with his selected repertoire and his well-tuned team.